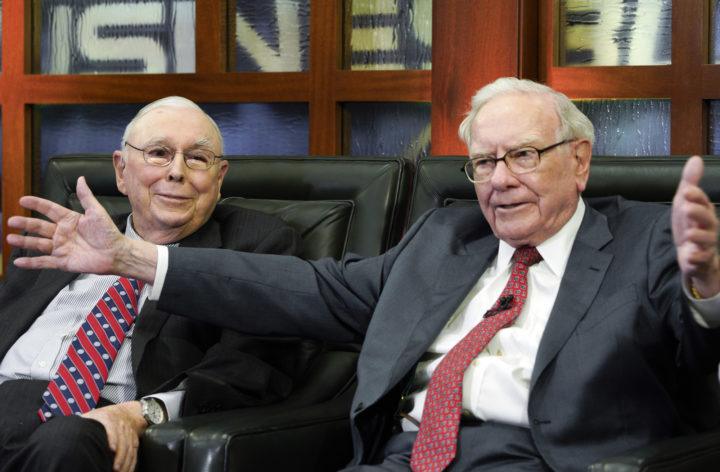 Ahead of Berkshire Hathaway’s third-quarter earnings report today, some critics are scratching their heads. How could the “Oracle of Omaha,” the great Warren Buffett, lose so badly to the stock market’s bellwether S&P 500 index over the last year?

Berkshire critics say the problem runs deeper than Warren Buffett having Kraft Heinz ketchup on his shirt. That’s because Berkshire Hathaway share prices have even (slightly) underperformed the benchmark index over the last decade as well.

Last month, one major shareholder sold off his $10 million stake in Berkshire Hathaway. David Rolfe at Wedgewood Partners then bashed Warren Buffett and Charlie Munger to his clients. He said they’d spent the last decade sucking their thumbs while other investors were making money:

“Thumb-sucking has not cut the Heinz mustard during the Great Bull Market. The Great Bull could have been one helluva astounding career denouement for Messrs. Buffett and Munger.”

But it’s evident from their investing philosophy, that Messrs. Buffett and Munger don’t think the market is really worth its current prices.

Berkshire Hathaway Inc.’s rotation of investors points to the question lingering as the conglomerate heads for its worst annual underperformance since 2009: Is it worth waiting for Warren Buffett to make a dent in his record $122 billion cash pile? https://t.co/VaTZYwTn9T

Berkshire Hathaway’s vice chairman, Charlie Munger sat down with the BBC for an interview almost exactly ten years ago on Oct 26, 2009. Eyeballs deep in the stock market crash and Great Recession, Munger had this to say about boom and bust cycles:

“People were making so much money, and the economy was doing so well, because it was being puffed up by this idiot boom, and idiot expansion of consumer credit, that everybody thought: ‘Oh isn’t this wonderful?’”

Then he compared the euphoria of stock market bull runs to shooting heroin:

“And of course it was. Your life in the next three weeks would be more pleasant if you went on heroin. But it would totally destroy you over the long pull. And that’s what an economy does when it allows itself to be seduced by the potential of an idiot boom, into allowing all this gross immorality and this craziness to take over.”

In this one quote, Charlie Munger foretold the entire next decade of market activity. The world’s central banks undertook a monetary experiment unprecedented in world history. The Federal Reserve and others multiplied the amount of circulating currency. And Fed Chairman Jerome Powell is still pushing the pedal to the metal today…

Why Warren Buffett Is Loaded for Bear

As a result, US consumer credit has expanded past its previous record high in 2008. US Treasury debt yields today evince a frightful bubble as well. Anyone seeking evidence that this “gross immorality” and “craziness,” in Munger’s words, has created a stock price bubble, need look no further than the WeWork fiasco.

The thousands of laid-off WeWork employees and the $39 billion investors lost in this debacle are the canaries in the coal mine. This episode in American business is the early warning signal of the stock market crash to come. WeWork founder Adam Neumann is walking away from this mess with $1.7 billion.

Above all, markets are supposed to allocate capital to its most productive uses, but this sure looks like an “idiot boom.” Rewarding this kind of capital destruction certainly qualifies as “gross immorality.” Charlie Munger might say the market has been getting high on the Fed’s supply. Warren Buffett has spent decades investing with a scrupulously sober temperament. It sure would be “one helluva astounding career denouement” for Berkshire to be caught riding this bull when it crashes.

Disclaimer: This article should not be considered investment advice from BSJ.