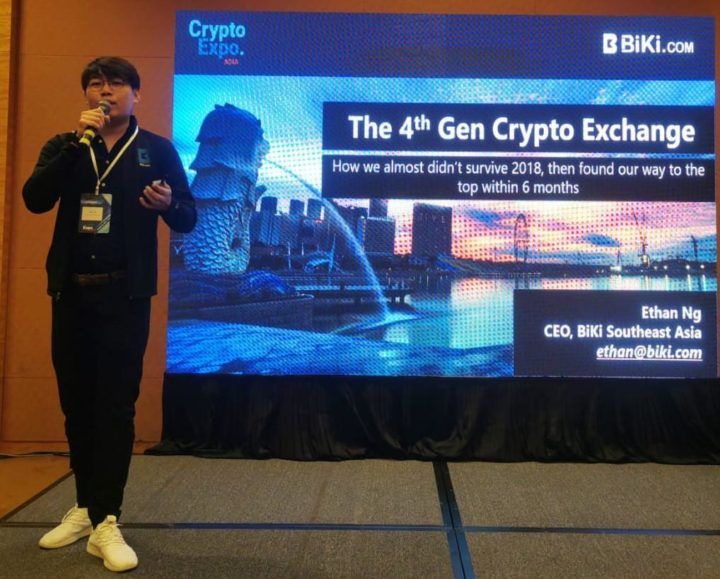 4th November, 2019, Singapore, Singapore – Since declaring globalization two-and-a-half months ago, it has been a non-stop city-hop for the digital assets trading platform – from Toronto to Singapore, London, Seoul, Osaka, Malta and Moscow, amongst others.

At Crypto Expo Asia in Singapore, right after crypto influencer, Tone Vays’ speech, CEO of BiKi.com SEA, Ethan Ng, took to the stage and outlined the exchange’s extraneous roles as a fourth generation exchange. The successful implementation of these roles has seen the exchange climbing steadily up the rungs of global crypto exchange rankings, presently at Top 5 on CoinMarketCap. And then it was a wrap, as the BiKi team immediately headed west, stopping first at Global Digital Assets Summit in Vancouver, followed by San Francisco Blockchain Week.

Currently focusing on western markets, the BiKi.com team continues on its global expansion journey, a blockchain adventure of sorts which could, in a sense, be likened to the popular Chinese literature classic “Xi You Ji” (Journey to the West), a tale of undertakings fraught with challenges but most importantly, also one that highlighted the power of cooperation.

Well aware that collaborations with local partners all over the world are instrumental to implementing successful global expansion, the young exchange is eager to continue its BiKi Partner Nodes program. Essentially acting as the “eyes and ears” of BiKi, especially in regions furthest away from the Asian exchange, these partners are able to refer high quality projects to the exchange for listing and extend BiKi’s reach into local communities, influencers and media globally.

Following the San Francisco Blockchain Week, BiKi will head off to the Malta AI and Blockchain Summit, a massive industry gathering, where Ethan will join the panel discussion, “Data is the new oil, but what do we do with it?”

A hub of blockchain activity, Malta has become a major nexus for disruptive new financial technologies. This will be BiKi’s second time in Malta, evidence of the exchange’s keen interest to foster strong and lasting ties in the bustling fintech space.

When German crypto research firm Blockfyre was asked about their recent partnership with BiKi, founder Jonathan Habicht enthused, “We are delighted about our partnership with BiKi exchange. We had the pleasure to meet the team during our last business trip to Malta, where we were immediately convinced of their capabilities and attitude to execute on their vision to become one of the leading exchanges in the Asian market.”

Indeed, BiKi’s continuous and focused globalization endeavours have secured the exchange many valuable partners and quality project listings in different parts of the world and the exchange appears well on its way to fulfilling its vision of ultimate internationalization and cementing a leading global positioning in the crypto exchange space.

Headquartered in Singapore, BiKi.com is a global cryptocurrency exchange ranked Top 20 on CoinMarketCap. BiKi.com provides a digital assets platform for trading more than 150 cryptocurrencies and 250 trading pairs. BiKi.com is focused on providing the safest, most stable and most effective cryptocurrency trading platform. 100% of the transaction fees are used in buyback and burning of platform token, BIKI. Since its official opening in August 2018, BiKi.com is considered one of the fastest-growing cryptocurrency exchanges in the world with an accumulated 1.5 million registered users, 130,000 daily active users, over 2,000 community partners and 200,000 community members. BiKi.com has received investments from Huobi co-founder Du Jun, Genesis Capital Zhu Huai Yang, FBG Capital, ChainUP and others totaling approximately 10 million USD.