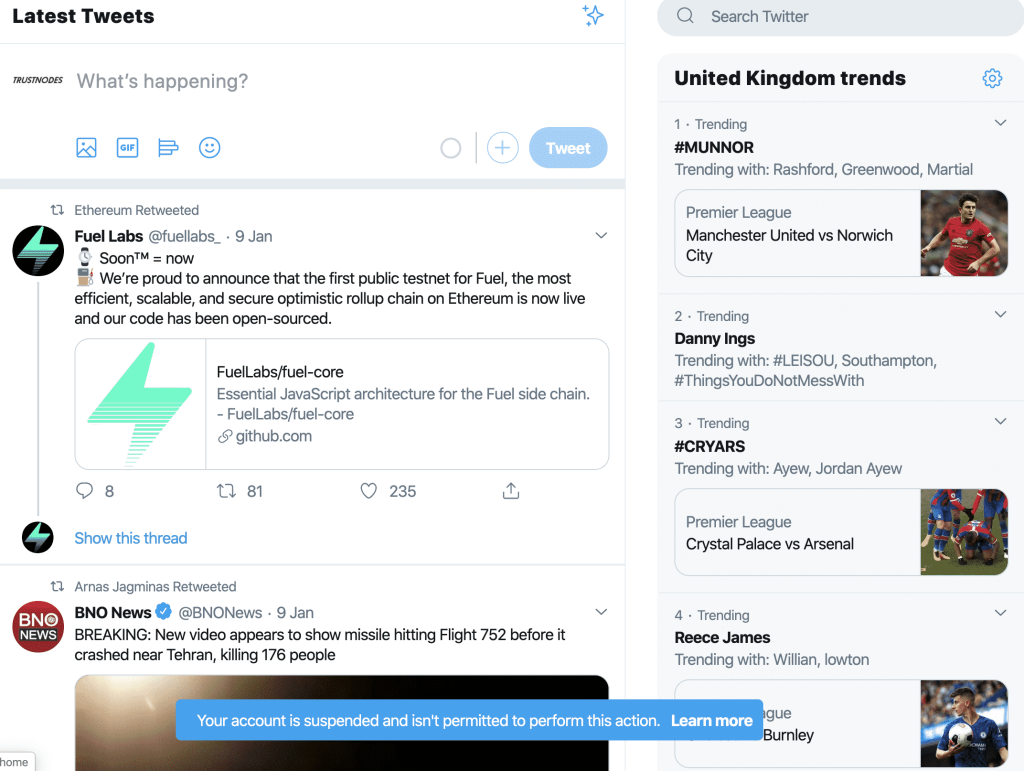 The suspension occurred on the 9th of January and days after we reported on the twitter account of the United States President, Donald Trump, being infested with scammers that has led to the loss of thousands of dollars.

“Trump Twitter Bitcoin Scammed, Thousands Lost” was our headline on January 4th. A few days later, there was a tiny notification of a semi-stealth suspension of Trustnodes’ twitter account:

That screenshot was taken on the 11th of January 2020, with the account now showing no further tweets from the circa 200 accounts it follows.

That blue notification at the bottom stands for only a few seconds, with notifications from mentions still received.

We suspect this is just an accidental suspension by twitter’s automated system, but they have not replied to requests for comments at the time of publishing or to a filed appeal, so it is not clear why it was suspended.

The suspension was about five hours after the brand account joked to bring attention to a somewhat minor announcement:

The “send 10 eth and we’ll send 20 back” scam is endemic on twitter, so we assume this suspension was just their bots automatically taking action.

Yet it has now been days since the account has been suspended, with questions raised in regards to their false positives policy.

For example, would NYT be suspended if they headlined: “The send one eth get 2 back scam is becoming endemic.”

To minimize false positives you’d take into account things like it’s a three years old brand account that has many followers and thus whatever the bot might have flagged should be sent to a human for double checking.

Not least because this isn’t the first time that what we assume is bot action has led to some inconvenience with the twitter account.

Back in March 2019 we headlined: Heated Debate on Censorship Ends Joe Rogan Show with “I Want to See the Blockchain of Twitter.”

The image above is now blanked due to this suspension, but it was a screenshot of them saying they’ve locked the account, requiring phone numbers and what not to unlock it, with the process being automatic.

At the time we just assumed the account was caught up in a cleanup of scammer bots which occurred around then in April last year, months after Dogecoin’s inventor coded a way to automatically remove scamming twitter replies and publicly revealed he shared it with Elon Musk whose twitter was a primary target of scammers.

Yet Twitter never said why they locked the account, with it unclear why they have now suspended it, but it’s most likely accidental rather than in response to our reporting on their handling of these scammer bots which now infest Trump’s twitter replies.