When to HODL and When to SODL 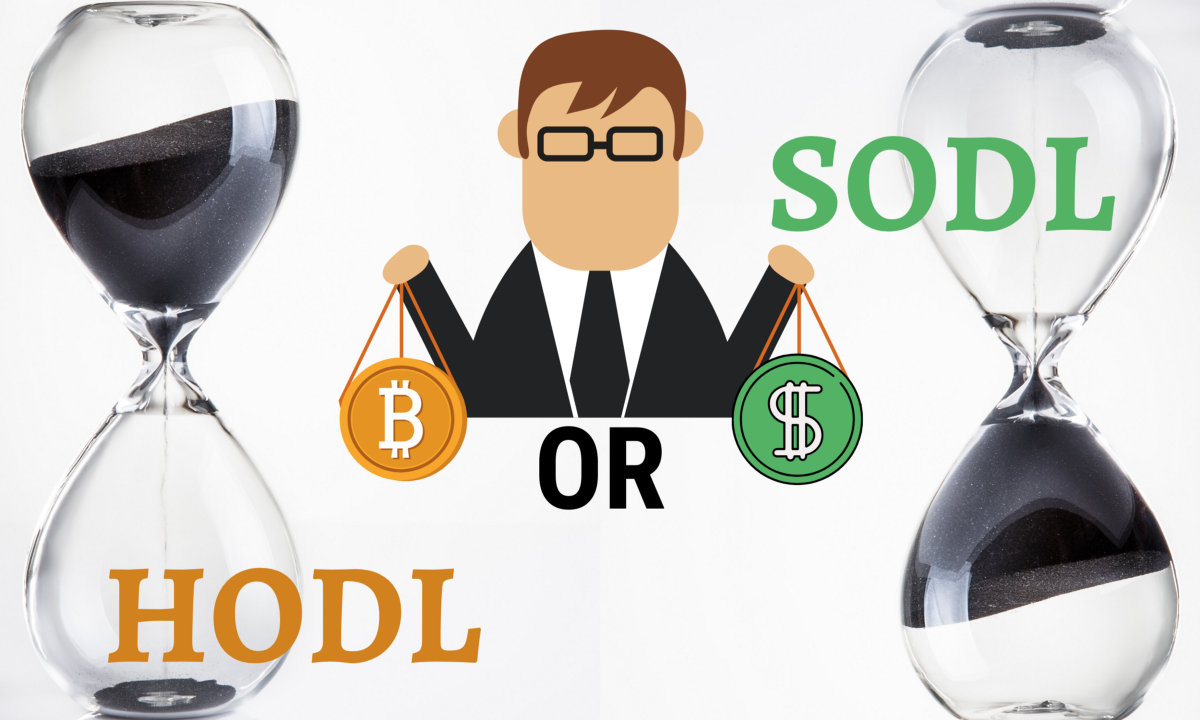 HODL was first coined in the Bitcoin talk forum in 2013 as a misspelling of “HOLD” when a user named GameKyuubi posted “I AM HODLING,”

In the post he ranted on that the best trading strategy was to hold, and then concluded with,

“You only sell in a bear market if you are a good day trader or an illusioned noob. The people inbetween hold. In a zero-sum game such as this, traders can only take your money if you sell.“

He then confessed that he’d had some whiskey and briefly mused about the spelling of his title, saying

“I type d that tyitle twice because I knew it was wrong the first time. Still wrong. w/e,”

Within an hour HODL had made its way into memes and quickly went viral on social media.

Later, it became known as an acronym meaning “Hold On for Dear Life”

Any investor who buys and holds cryptocurrencies may be called a HODLer.

There are some, however, who truly believe that cryptocurrencies will eventually replace fiat currencies and form the global economic foundation of the future. These HODLers are loyal to the end. They’re unswayed by sudden price changes, fake news, sarcastic memes, or any other viral content spread by social media influencers.

HODLers hold their coins while they ignore the noysayers and over-hyped price predictions. They simply hold, which helps them counteract two common negative influencers:

Investing in Bitcoin and other altcoins is a fast-growing trend.

There are, however, a lot of risks and external factors that could make cryptocurrencies worthless. Its vulnerability is due to the cryptocurrency market volatility fuelled by hype, demand, and adoption.

Remember: If you buy Bitcoin or other cryptos, you can lose everything in the blink of an eye.

Now that we’ve gone over the disclaimers, let’s talk about when the HODLer is supposed to sell.

How are HODLers supposed to know when to sell?

To date, traders have not been able to use traditional financial concepts to predict accurate cryptocurrency price movements.

Many have tried, but every attempt has been stymied by the unprecedented volatility of the market. Even the most accurate price predictions based on a chart analysis have shown that no methods are sufficiently consistent to qualify as a technical strategy.

Truth be told, you never know what the market is going to do.

With this still a fresh and loosely regulated market, there are still so many potential risks that could affect the price enough to influence your decision whether to HODL or sell your coins.

If you really don’t know how to trade cryptocurrencies, you’re not alone.

Cryptocurrency trading is still very new. Until recently, there were no reliable data on which new traders could rely to measure past performance. Many traders had to learn “sink or swim” thinking as they dive into the uncertain depths of crypto trading. Then there are those who preferred “wing it” as they carefully navigated the uncharted skies.

Part of investing in cryptocurrency is learning what works for you. Be the one to mitigate the risks, and that means you’re going to have to be the one to determine when the time is right for you to sell. No one can tell you on that note, with certainty, when to HODL or when to sell.

However, it’s a good idea to listen carefully to any advice or tips given by a professional with years of experience in watching and learning what influences the crypto markets to rise and fall. And what do you know? It’s a lucky day, because I’m such a professional.

Things I’ve learned as a freelancer in this field since July 2017.

Many cryptocurrencies have come and gone just because they’ve lost traction.

Others fell down, only to jump back twice as high. For example, Bitcoin rose by 52,000 percent from 2011 to 2013, and then fell by more than 80 per cent over the following year. Since then, it has shot more than 17 times his previous high, only to fall by half again.

A common mistake among HODLers is missing the chance to cash out profits at the height of the rally. But the most serious mistake you can make is to buy high, when everyone is euphoric, and then panic sell when the price suddenly drops or crashes.

This is the quickest way to go broke. Sounds easy to avoid, doesn’t it? … It happens more often than you might think.

Part of learning when to HODL or sell is realizing that it’s not always wise to hold all of your BTCs. Volatility makes you very likely to have extreme spikes and crashes.

If you notice a significant price drop and have banked all your investment money, you may need to read about new investment strategies.

However, there’s still a way to get things right and let your cryptocurrencies climb up a bit. Holding a portion and selling another portion allows you to hedge your investment and reduces the risk of losing everything.

Often, the choice depends on fear or despair.

Cryptocurrency is very volatile, enormously so. It’s enough to make a lot of people panic-sell when they’re not supposed to. This could lead to a lot of potential losses as the currency could jump back.

Instead of selling to zero, a lot of investors are selling enough cryptocurrency to make the ends meet for a bit while keeping the rest in HODL. This allows you to remain financially stable while waiting to see how things are going.

Don’t let FOMO trick you into HOLDING your coins.

Fear Of Missing Out, that’s a pain. We’ve all had the currencies we’ve sold, just to see the price spike the next day.

It’s part of the game, and that’s why many traders make a mistake about HODL, when they really should have cashed out their profits and waited for the next dip to be reinvested.

Don’t get greedy; you could lose all your profits much faster than you expected.

The coin doesn’t seem to be competitive anymore, it’s not a matter of whether to sell or to HODL. Just sell them while you’ve got a chance.

Likewise, they sell underdeveloped and overpriced coins. The real number of people who get cryptocurrency isn’t that high at all. Cryptocurrency runs on hype, and the truth is, a lot of coins are over-hyped and over-valued.

Overvalued coins, unless they’re at the top of the coin, they’re not the ones to invest in. These are the coins that often end up with major crashes. As a result, seeing a lot more hype without backing or widespread use is often a sign that you should sell.

If the community of coins shrinks, sell some of them.

Most cryptocurrencies do not have a product or company that supports them; they are supported by disparate users and online communities.

If you no longer hear about a coin or if implementation dries up, it’s probably a bad sign.

Cryptocurrencies need people who use them to survive, and they need to be highly value-added. If no one uses them, they’re not worth a lot, and they might just be dropped from the exchange platforms.

If your coin drops a major exchange, sell it if possible.

A lot of altcoins increase their value as they appear on major exchanges like Coinbase. Once the top exchange of coins stops carrying your cryptocurrency, others will often follow suit.

As a result, you’ll end up with a dead cryptocurrency.

If your government is looking to clamp down on cryptocurrencies, consider selling.

The decentralized, non-fiat nature of cryptocurrency is not exactly good for many governments.

Governments that have tight control of Internet use in their countries are most likely to ban the trading of certain cryptocurrencies.

China recently signaled that it could put an end to cryptocurrency mining among its citizens, which could cause a major market crash. Korean cryptos, too, took a similar hit.

If the government bans it, sell it first.

Cryptocurrency will be hit if its home country bans mining, even if it is a decentralized currency; as a result, a lot of people will sell.

If the country of origin does most of the trading and mining of your currency, selling a large part of it could be a good idea.

The decentralized nature of cryptocurrencies means that you can still find users in the world that could lead to a bounce back. That’s never, however, certain.