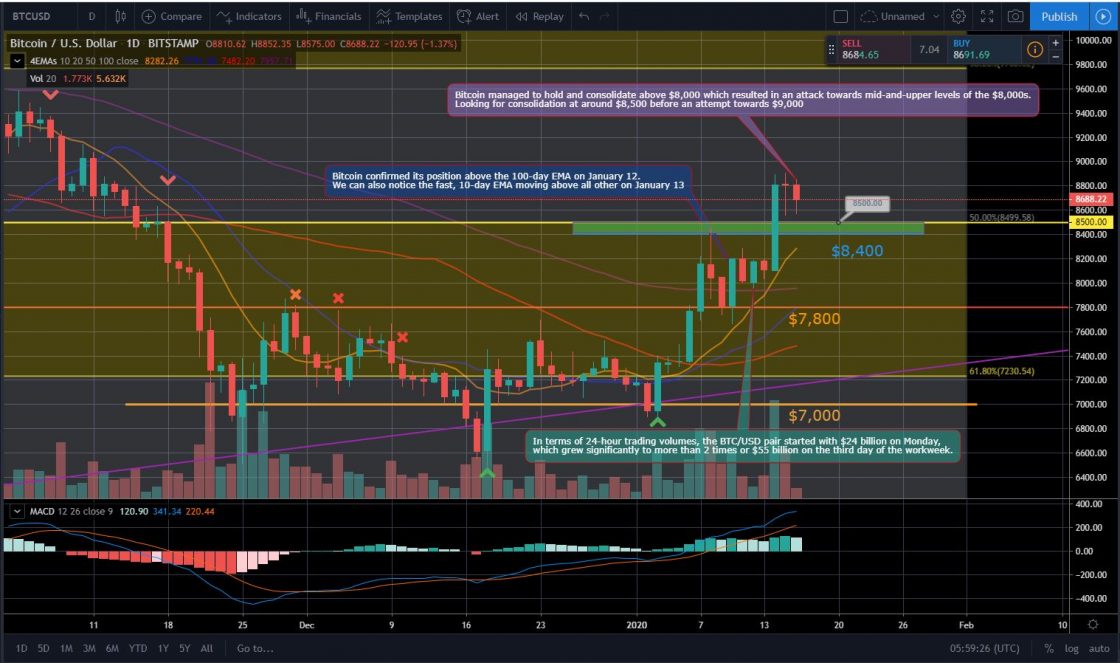 The total crypto market cap added $20 billion to its value since the morning of Monday, January 13 and now stands at $236.5 billion. Top ten coins showed mixed results for the last 24 hours with Bitcoin SV (BSV) losing 13.7 percent of its value while Cardano (ADA) moved up with 2.4 percent. At the time of writing bitcoin (BTC) is trading at $8,702 on the Bitstamp daily chart, while ether (ETH) stands at $161 and Ripple’s XRP hovers around $0.225.

On Monday, the BTC/USD pair started the new trading period with a small correction to $8,100. Still, bulls managed to keep the price above the 100-day EMA, which was surpassed two days earlier.

The zone around $8,000 was now serving as a consolidation area and on Tuesday, January 14, BTC formed a huge green candle on the daily chart. The most popular cryptocurrency climbed to $8,821 and added another 8,9 percent to its value.

The mid-week session on Wednesday brought no changes in direction as the coin stayed around the $8,800 level even though it was trading in the wide range between $8,900 – $8,560. The next target for bulls is to hold the mid-$8k gains and then consolidate properly for an attack towards the psychological level of $9,000 and then $9,300.

In terms of 24-hour trading volumes, the BTC/USD pair started with $24 billion on Monday, which grew significantly to more than 2 times or $55 billion on the third day of the workweek.

Bitwise, the popular cryptocurrency index, and fund provider shockingly withdrew from its request to launch a bitcoin-backed Exchange Traded Fund (ETF) on January 14. The company, which was previously planning to list the new product on NYSE Arca exchange officially filled the Registration Statement with the US Security and Exchange Commission (SEC) on January 10 stating that “withdrawal request is consistent with the public interest and protection of investors”.
The initial ETF proposal was filed on 28 January 2019 and rejected for the first time by the SEC on October 9, 2019

The Ethereum Project token ETH moved up to $146 on Sunday, January 12 and closed the 7-day period 8 percent higher. It successfully moved out of the $140 – $145 support zone, which confirmed the consolidation is over and put the target at $160.

On Monday, January 13, the coin opened the new trading period by dropping down to $143 and erasing its gains from the previous sessions.

The next day, however, was more positive for buyers as the leading altcoin skyrocketed to $166 following the general crypto market uptrend. The coin added 16 percent to its value and returned to an area last visited in November 2019.

The third day of the workweek came with another high volatility session, which resulted in the fact that neither bulls nor bears managed to take over control leaving the ETH price unchanged for the day.