Beyond the stock to flow model, why BTC may eat gold first, then fiat 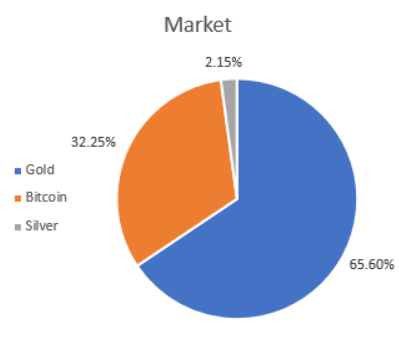 So we notice everything looking so good until 2028, but at 2032 we see the price start appearing a little bit too high, by 2040 is almost 4 billion per coin, by 2076 is already 3.4 quintillion and by 2136 is an astronomical big number that I don’t even know how to name it, just before turning infinity when the last bitcoin gets mined on 2140.

So what is going on? PlanB suggest not to extrapolate too much into the future as we will go into an scenario we have never seen before, I honestly don’t find it reasonable and I have to disagree on that, why would we assume this model will work until 2025–2030 and stop working after that, why would we put a limit just after our goal is met and ignore the rest of what the math is telling us from there, it just doesn’t make sense and the assumption will be biased on my opinion.

However, I do think the model is correct we don’t need to put any special limit and the outputs is giving are completely reasonable, let me explain:

Do I think bitcoin will reach an astronomical purchasing power so that we may be able to buy the hole Earth by spending 1 sat? HAHA, NO!

Then it has to be the dollar is going into a hyperinflation, then when bitcoin reaches infinity is because the dollar will be worth nothing, not enough of nothing will be worth something, that makes sense! mmm, not really…

I think we all are getting confused just because we are using dollars as the unit of account here, let’s forget about this financial system that just happened we were born in, and go back to fundamentals to start looking at it from an abstract and objectively perspective, everything will make more sense, I promise.

I don’t think I has to explain why bitcoin would not reach an infinity purchasing power, so what about the hyperinflation scenario?

I am not saying it won’t happen, the thing is, there is no way for this model to actually know it, there is not information about the fed making QE, what the US national debt is, if we are going to have a recession, if the markets will crash, none of that is in the data-set, so for believing the model is forecasting this, it needs to be some king of prophecy.

In fact the value of things has nothing to do with the dollar or any other currency really, everything has some value compared to everything else and this is driven for supply and demand only

Just to make this clear let’s change the unit of account to cuts of coffee, let say a cup of coffee is $2 at today’s value, so if we run the model again comparing the price against cuts of coffee instead, then gold would not be a 8 trillion dollars market cap but a 4 trillion cups of coffee market cap, we can create a new model based on our new unit of account and we will see a slightly different function but still a 95% fit, and with the same pattern in the long run, bitcoin being able to purchase a ridiculous amount of coffee, does that mean cups of coffee will go into hyperinflation as well, of course not.

We can see a clear correlation that we can’t ignore and I believe this is showing the relative value of an asset against the rest of the market, which market? The store of value market.

In order to understand why this phenomenon of scarcity drives the value of things I have a hypothesis, for this we need to go back to the free markets because as we are told what to use and what not to use we are not letting nature really act by itself, and everything starts getting pretty confusing.

Now, let’s image the value of everything disappears, we all forget what everything is worth, so all there is is all the physical and digital things.

At the start everything will be wildly volatile as nobody will know what to bid or ask for the goods, our brains would need a point of reference so that we can measure things easily, we need a unit of account, it can really be anything like beans.

We also have another problem, what if you want to trade with me for some goods but I don’t like what you have to offer me, what if I don’t want anything right away, should I stop providing my service until I need something again, would be nice if there was something we can trade and I can hold to it and trade it at any point in the future for another thing, so that I don’t have to claim the reward of my service right away.

If the price of things is driven by supply and demand if I want to hold something I want to pick something that devalues as less as possible or if it gains value is even better! Let’s say bitcoin doesn’t exist, I may not know about the SF model so I will probably silly pick something like aluminium, but on a macro scale on some period of time, society will pick gold again, because directly or indirectly people will just notice gold holds pretty well it’s value because of the low inflation rate, so gold will have value not because it has “intrinsic value” but because it holds its value (as weird as this sounds).

Silver at the second place will still have value as store of value, how much? Our hypothesis says that it depends on the difference between the gold and silver SF, the store of value market will pick a price so that when the distance between those SF increase the distance between prices do as well on another order of magnitude, the store of value market cap will not increase because of this but will balance accordingly, this is the pattern we are seeing reflected in the SF model, if gold did not exist, silver would be many times more valuable, but just because of its existence silver would be on its shadows forever, unless gold’s SF decreases or silver SF increases.

Let’s take wood for example, why don’t people hold wood instead? simple, why would you hold wood thinking is valuable when the hole stock of wood doubles every year, look at gold it doubles every 50 years, that is definitely difficult to get and also puts less selling pressure on the market. So assuming wood has a SF of 1, using the SF model you will see its store of value will be nothing relative to gold, so while mathematically wood will still have some peace of the store of value cake, realistically it is zero.

If we all use the same store of value and is also divisible and fungible we call it money and we use it as unit of account as well, unless government step in and says you are forced to use this paper, that is completely out of the equation.

What is wealth? Is important to understand that all world’s wealth is fixed, all there is is 100%, everything has a value compared to everything else and when something increases or decreases on value it’s because the value is just moving into something else, is impossible to create or destroy wealth, if you ever feel like that is happening, it is not, is just changing hands, so a wealthy person is somebody that just happens to own things that at the current exchange rates is way bigger percentage of what the average person own at current exchange rates, so the most you can have is 100% (you own the world), 0% (you own nothing) or something in the middle, not man can change this fact, but build pump and dump schemes around it.

What is the store of value market? It consists of the bunch of things people will buy not only because they want it but because they plan to sell at any time in the future (buying things with it is also selling), for example a computer is a terrible store of value, nobody really buys a computer pretending to sell for other thing in the future, they buy it because they want or need it, not the same about a Rolex watch you may like the watch, but the value holding part is implicit on its price, what about gold? most of the people would not buy it if is not for selling later, or fiat, who doesn’t want a pretty printed paper? all assets are competing in the market for this purpose.

This makes it clear that if gold didn’t exist, silver and other store of value assets will have a higher value, since store of value market cap is defined by the demand for saving, non existence of gold would not stop a person from saving, they will just pick another asset, and market will balance based on the SF of remaining assets. The same will happens if there were a better asset that is just like gold but with higher SF (lower inflation), this will not create more savers, so the store of value market cap would not increase but once again, balance accordingly to our new friend :).

Now that we are in context, let’s run some numbers. We will not treat the model numbers as dollars anymore, but just a measure of relative value, so we can calculate what the value of bitcoin as store of value would be compared to gold and silver at different halvings.

Let’s start by reference by just charting gold an silver, by combining both market caps as today, silver and gold represents 3.52% and 96.48% correspondingly, lets see what the SF model predicts it should look like: