Why Investors Are Almost Certain For The End-Year Rally to $13,000 | 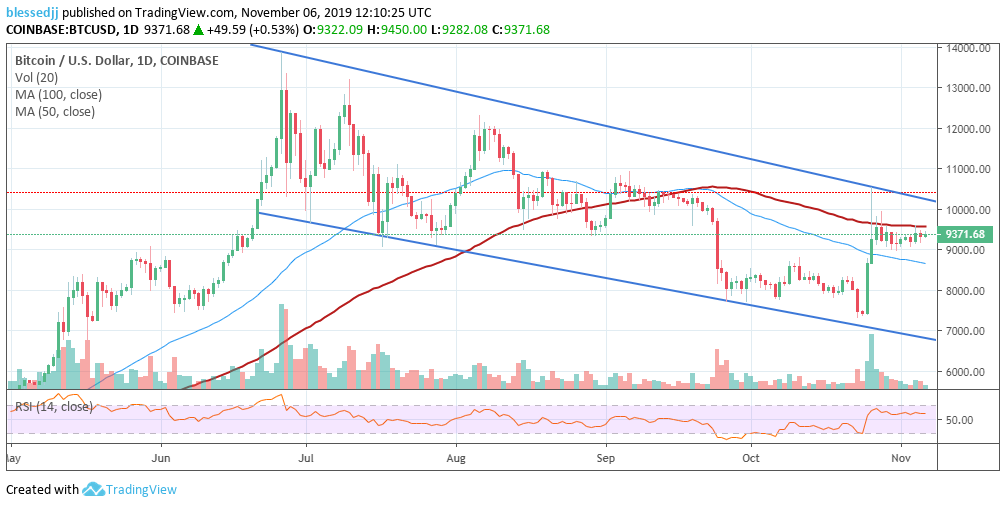 Bitcoin has proved on numerous occasions its ability to rise from the ‘ashes.’ The latest example being the recent recovery from $7,300 to highs around $10,534 (on coinstats). Although there was an immediate reversal that rested levels slightly under $9,000, Bitcoin swung towards $10,000.

Meanwhile, Bitcoin is trading within a wide range with an upward limit at $9,600 and a lower limit at $9,000. An attempt to clear the range resistance on Tuesday failed to yield. For now, Bitcoin is teetering at $9,390 while the upside is capped by the 100-day MA.

It is becoming apparent that Bitcoin bulls must gather the strength to clear the resistance at the 100-day MA and $9,600 to be able to launch an attack on $10,000 and higher levels towards $13,000. The descending channel resistance is another hurdle that if broken, will increase the momentum of the breakout.

Also Read: What Will Be Bitcoin (BTC)’s Price in 2020? Leading Analyst Explains

From a technical picture, Bitcoin’s current ranging trend is likely to continue. The Relative Strength Index (RSI) is in a ranging motion at 58. The recent surge saw the RSI approaches 70 but formed a high at 66. Traders should be on the lookout for movement to the north which is likely to encourage more buy entries. Besides, the range support at $9,000 Bitcoin will find support at the 50-day MA, $8,400, $8,000 and $7,300.

The post Bitcoin Price Analysis: Why Investors Are Almost Certain For The End-Year Rally to $13,000 appeared first on Coingape.