The Importance of Supporting a Robust Developer Ecosystem

“It takes a village to raise a child,” is a popular saying that emphasizes the role of a larger group to properly nurture and develop the youngest members of society.

The same holds true for young businesses. Without the endorsement of its 16 million-plus backers, Kickstarter projects would not come to fruition. Twitter would surely not have evolved into one of the world’s most well-known social networking platforms without adoption from 330 million monthly active users.

Community supporters are the lifeblood of emerging companies. So, it’s critical for companies to know how to respond to, and interact with, their communities. Whether made up of consumers, users or developers, brand advocates should be prioritized, engaged with, and listened to. For young businesses juggling many priorities, this can be a challenge.

A defining quality of any endeavor’s success can often be measured in terms of support. Whether it is the capital of pioneers who first forged into an industry or the consumer adoption of a new good or service in the marketplace, without support, it would often not be possible for the ecosystem to grow beyond early adopters. As this applies to open-source blockchain products, the support of developers often represents the difference between success and mass adoption, and failure and obscurity.

For the major role they play, blockchain developers are a sought-after commodity. Hired’s State of Software Engineers Report for 2019 shows a year-over-year 517% rise in global demand for blockchain engineers. The blockchain industry’s growth stems from this community’s diligence to test new releases and provide feedback. For up-and-coming enterprises, collaboration with developers has led to rapid growth for software and quick newcomer adoption.

A chain of successive improvements

The blockchain industry owes its beginnings to a community of developers that supported  Bitcoin. As the first mover among blockchain technology platforms, Bitcoin’s proof-of-work and encryption mechanism laid the underpinnings from which many other open-source blockchain platforms would follow. A community of minds working together made this momentum possible, and the growing support of a diverse number of developers has resulted in a more thoroughly tested — and thereby robust — code base. 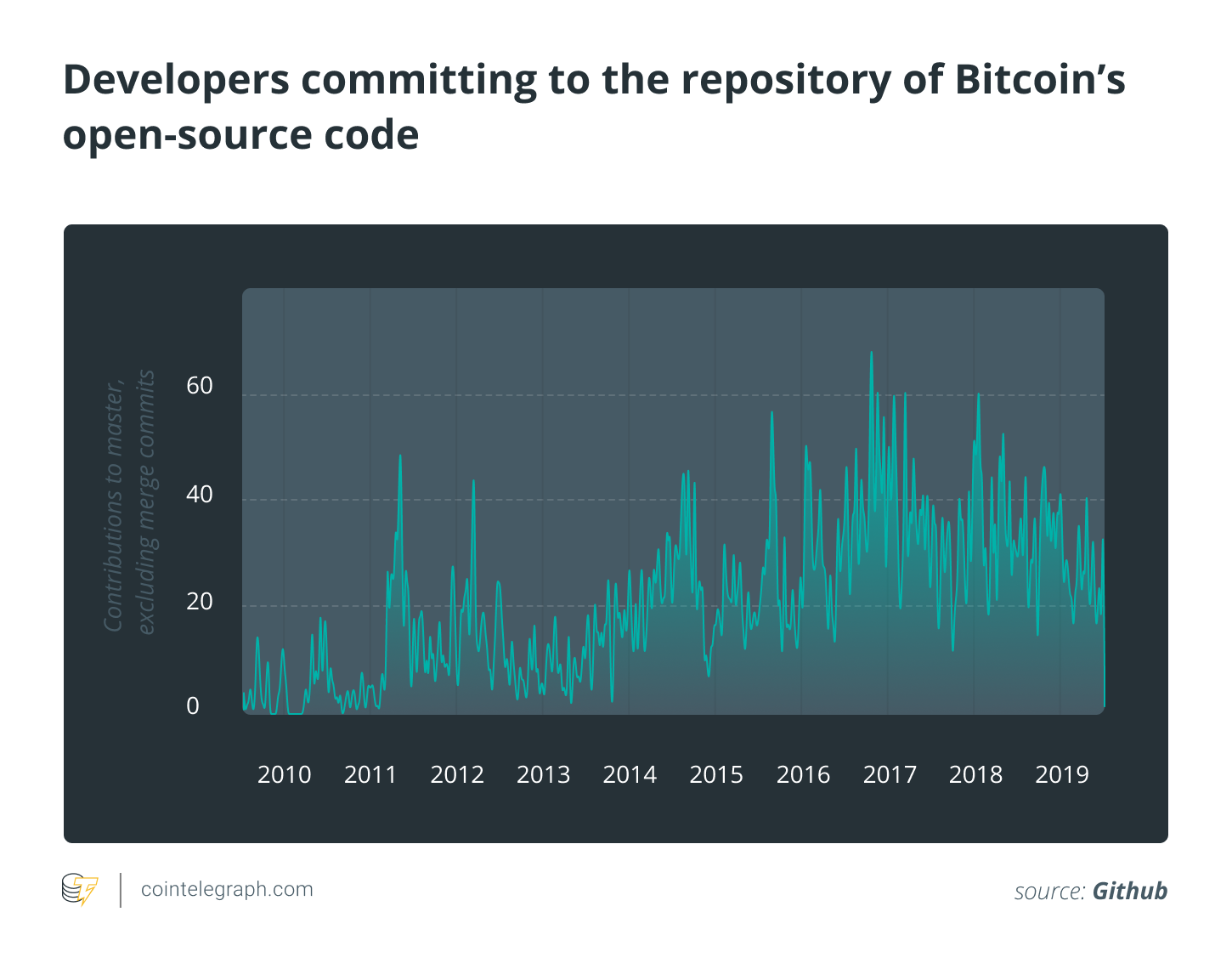 As it expanded from a handful of developers running nodes scattered across the internet, blockchain technology blossomed into a more decentralized network of validators. Although it stemmed from relatively humble beginnings, there are now at least 9,493 reachable nodes in the Bitcoin network. The growing diversity of the teams working on the network’s infrastructure enriched the community. Open-source code made it possible for anyone to branch off and develop their own solutions. From this creative sandbox, other networks emerged, giving rise to an ecosystem of blockchain applications. Some examples of this can be seen with the launch of Ethereum in 2015 as well as that of EOSIO in 2018.

How to nurture a long-lasting community

Developers thrive when they have access to the latest tools, educational frameworks and reference examples that improve the learning experience to continue building on blockchain software. In turn, developer feedback is taken into consideration by the core teams who engineer many of the open-source protocols that make blockchain applications work. This feedback becomes an outlet for community input on how platforms evolve to meet the needs of a rapidly growing user base. The results of this back-and-forth are often reflected in the open-source Github repositories behind various projects.

The Bitcoin Core Github repository offers a solid example of how community support ultimately stimulates growth. As the code base grew, a lack of formality in the coding style led to inconsistencies. To better manage input from a growing number of engineers, development guidelines were published that allowed for a more efficiently coordinated effort. This move simultaneously strengthened the community and Bitcoin Core’s code repository during a phase of growth.

When open-source development communities have access to vast libraries of tools that simplify the building process, it makes it possible to more rapidly deploy projects. For Ethereum developers, a long list of open-source tools has been published to help developers get started. With numerous resources at their disposal, engineers have an easier time making their creative visions a reality.

One example from my company, Block.one, is the release of a Contract Development Toolkit complete with a set of utilities designed to aid EOSIO developers as they build smart contracts. The toolkit lets developers process and compile C++ code to WASM binary code to be executed on the blockchain. It also contains a more advanced set of tools to customize smart contracts to meet maximum performance and efficiency criteria.

Today’s blockchain development community spans multiple platforms. By tapping the collective community wisdom, software companies could solve some of the thorniest tech issues. When software architects offer their support, it becomes possible to harness the potential of a robust developer ecosystem. Building connections with communities at the start may yield global inputs to bring creative answers.

Serg Metelin is the head of developer relations at Block.one. Originally from Ukraine, he was one of the early pioneers of social media applications for Eastern European social network VK.com. After moving to Australia in 2009, Serg worked with digital and marketing agencies and consultancies, delivering solutions for large Australian and international brands such as Disney, Electronic Arts, Woolworths and others. In 2015, he won a Westpac-sponsored Australian national competition, “[email protected],” securing seed funding for his food delivery startup HowAboutEat, which he co-founded and served as the company’s chief technology officer.