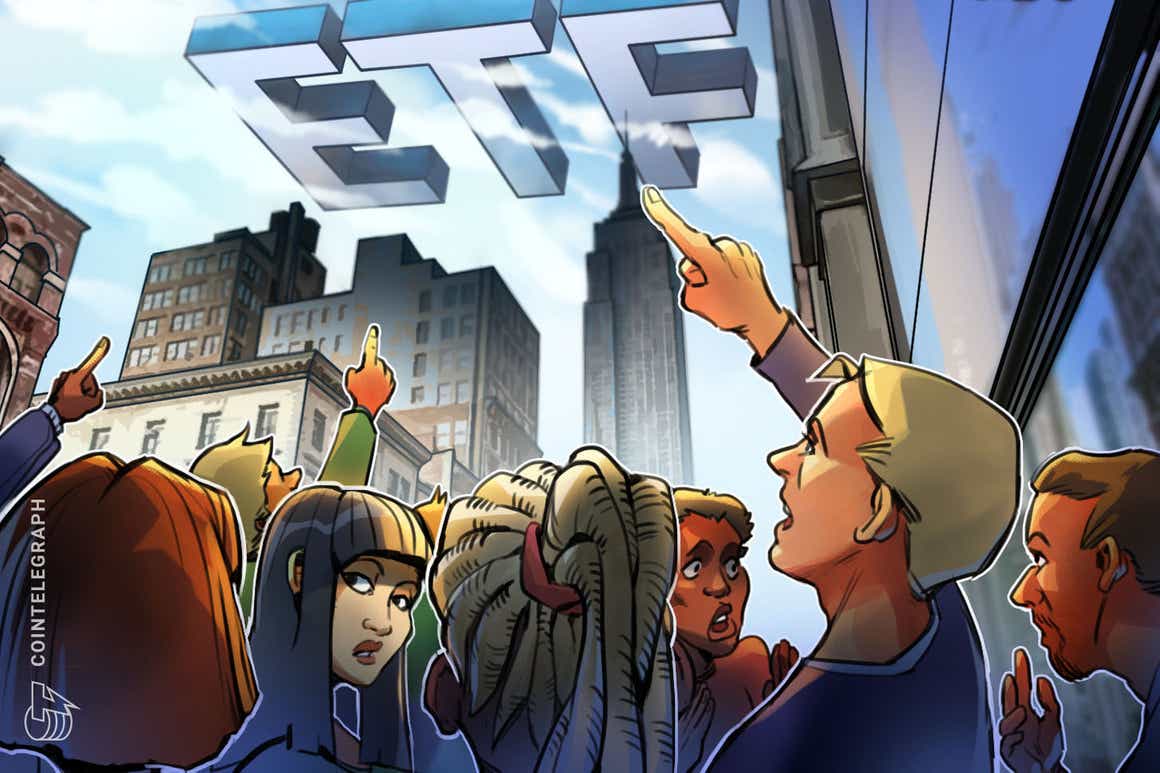 Bloomberg’s senior ETF analyst says there are “good” signs that a Bitcoin $BTCUSD ETF will soon be approved, pointing to Ark Invest filing for a Bitcoin $BTCUSD futures ETF with an assigned ticker and Valkyrie updating its own ETF prospectus with a ticker.

Cathie Wood’s Ark Investment Management LLC filed for a Bitcoin $BTCUSD (BTC) futures ETF under the ARKA ticker, while Valkyrie has assigned its BTC futures prospectus with the BTF ticker.

According to Bloomberg analyst Eric Balchunas, firms typically update their proposals when they have everything set and “ready for launch,” suggesting that Valkyrie may soon be given the green light by the U.S. Securities and Exchange Commission (SEC).

Balchunas also pointed to Ark Invests’ Bitcoin $BTCUSD futures ETF application on Oct. 13 in partnership with 21Shares and whiteAlpha Architect white label, noting that the assigned ARKA ticker was “another good sign” that the SEC was set to give a tick.

People keep asking me what I’m looking for first to confirm SEC approval and it is these type of updated prospectus filings. That’s what happens right bf a launch, they fill in all the XXs and add ticker. That said, this is bitcoin so WTF knows for sure lol.

Referring to Valkyrie’s ETF, the analyst added that he looks for “these type” of updated prospectus filings when determining whether an official SEC greenlight is incoming, and said that applicants often update the final details “right before” launch. He conceded that with the crypto sector, nothing is certain however.

Permabear Mr Whale downplayed the significance of the Ark Invest news saying all Ark did was update its “ARKW ETF prospectus” to say that it may gain exposure to BTC via exchange-traded funds in Canada.

However Ark’s latest ETF filing with the SEC has no mention of the word “Canada” and the application clearly outlines that the fund is seeking to invest in “exchange-traded Bitcoin $BTCUSD futures contracts that are cash-settled in U.S. dollars” on the Chicago Mercantile Exchange (CME).

ALSO notable, this is the second straight filing to not have the word “Canada” in it. It ONLY invests in futures no BTCC or GBTC options. Rumor is SEC no like that and wants them to be strictly futures. pic.twitter.com/l8KTxFtWH8

The price of BTC has surged 28% since the start of October to sit at around $57,500 at the time of writing. Many onlookers have attributed the recent pump to expectations that the SEC will soon approve a futures-based Bitcoin $BTCUSD ETF.

“Yes, the SEC has kicked can on Bitcoin $BTCUSD ETF approval BUT that is for the physically-backed ones under ’33 Act,” he said and added:

“The futures ETFs filed under the ’40 Act (which Genz loves) are very much alive and likely on schedule (we think 75% chance approved in Oct).”

Opinions vary however and Todd Rosenbluth, senior director of ETFs and mutual fund research at research firm CFRA argued this week he believes that approval of a BTC futures ETF may be delayed until 2022.

Speaking on CNBC’s ETF Edge, Rosenbluth stated that the current clouded regulatory landscape could cause further delays and that the SEC could be waiting to approve all the ETFs simultaneously to avoid a “first-mover advantage.”

“It’s possible — in fact, we think it’s likely — that we’re going to see a delay of a Bitcoin $BTCUSD futures ETF until 2022 until the regulatory environment is more clear,” he said.