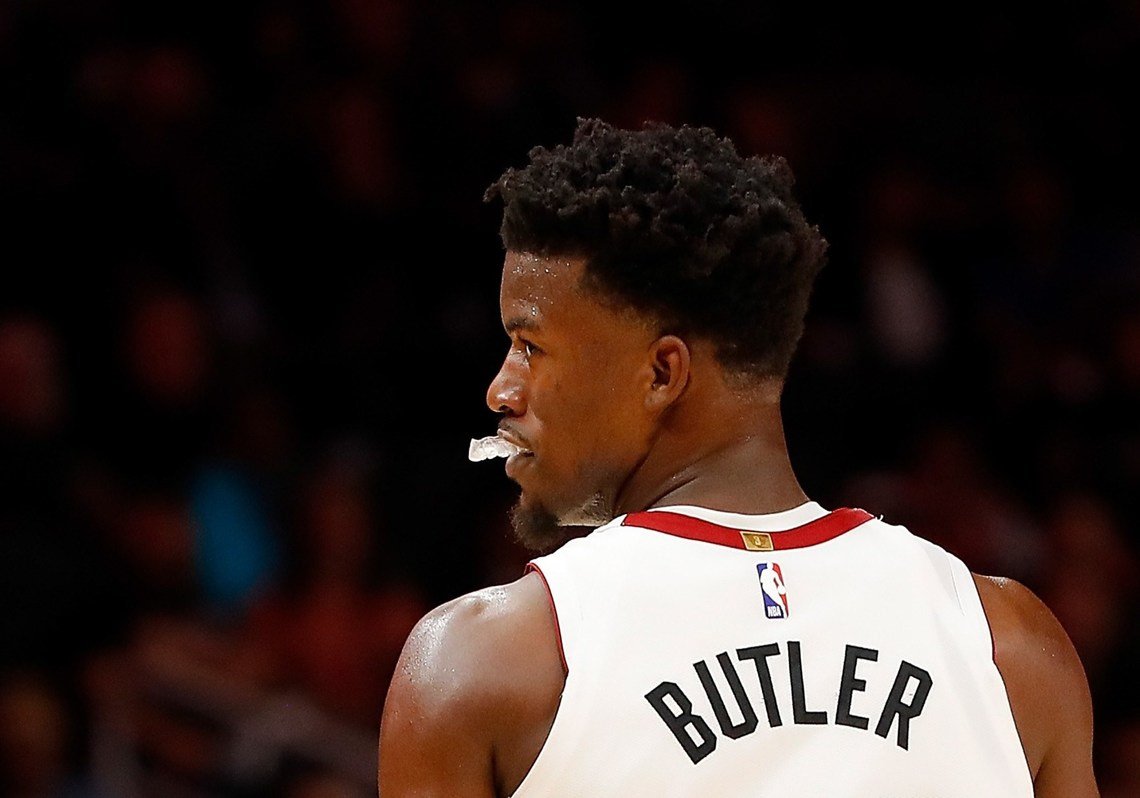 Jimmy Butler and the Miami Heat are coming for the rest of the NBA’s lunch. Led by Butler and a group of youngsters, cast-offs, and unknowns, Miami has come out slaying giants.

Just ask the poor, title-hungry Houston Rockets. Still reeling from their Hong Kong controversy, Houston was shell-shocked last night in Miami. The Heat surged out to an eye-popping 46-18 lead against the newly formed “super team.” It was the third-largest lead ever built after one quarter since the beginning of the shot clock era (1954-55). The Heat went on to win by 29, causing former MVP James Harden to admit, “they came out and blitzed us.”

With a 5-1 record, they’ve been doing that a lot lately.

Was the Jimmy Butler Trade the Best of the Summer?

When the 76ers traded Jimmy Butler to the Miami Heat this summer, most people didn’t bat an eye. The basketball world was in the midst of the biggest superstar relocation experiment in NBA history.

Before the summer ended, the Lakers would trade for Anthony Davis. The Clippers would acquire Kawhi Leonard and Paul George. The Nets would get Kevin Durant and Kyrie Irving. Kemba Walker would be on the Celtics. And Russell Westbrook would move to Houston. All of these moves seemingly created new super teams, and the Miami Heat just seemed to get a little better.

And yet, we’re six games into the season, and the Miami Heat are, statistically, the best team of the lot. Led by Butler, the Heat are topping the league in point differential with +11.6. But the way they’re doing it is even more impressive.

The Rookies, the Role Players, the Range, Oh My!

Six games through the season and the Heat have won largely without Butler, who missed the first three games due to his child’s birth. Rookies Kendrick Nunn and Tyler Herro have stepped in major ways during his absence.

Nunn, who was picked up off scrap heap this summer, has scored more points in his first five games than anyone in the past 25 years—except Kevin Durant and Jerry Stackhouse. Nunn is averaging 19.5 points while shooting a scorching 45% from deep and 48% from the field.

Herro, meanwhile, has chipped in 15.7 points and 6 rebounds per game. The former Kentucky Wildcat joins Nunn to give Miami two bonafide deep threats to space the floor. Throw in second-year forward Duncan Robinson, who’s averaging 2.8 threes on 50% shooting, and Miami has manifested full cavalry from deep, from mostly unknown players.

It All Starts with the Front Office

Led by Pat Riley and Erik Spoelstra, the Heat have an identity. They’re tough, they’re disciplined, and they will outwork you. Unlike teams such as the Lakers, who will trade their entire youth movement for a star, the Heat spend time developing their talent into building blocks.

Third-year center Bam Adebayo is reaping the fruits of their (and his) labor. Adebayo has been a menace in the middle for Miami this season, averaging 9 rebounds, 1.7 blocks, and almost 14 points. He’s quick on his feet and can guard multiple positions. Bam is also discovering a knack for playmaking, averaging 5.2 assists. He’s the main reason the Heat were so willing to part with center Hassan Whiteside, a key piece of outgoing salary that created space for the Butler trade.

Because of that trade, the Heat were able to add a superstar that perfectly embodies their vision. Jimmy Butler has been showing up to 10 am practices at 3:30 in the morning and other players are following suit.

While they don’t have multiple superstars like most NBA title contenders, something special is brewing in Miami. The Heat have the leadership, the attitude, and the experience to put themselves in title talks this year.

This article was edited by Josiah Wilmoth.