It is rather uncommon for a cryptocurrency network to grind to a halt. In the case of IOTA, the Foundation somehow managed to shut down the Tangle due to an incident.

When developers or a Foundation can “pause” a network, there is something amiss.

The IOTA Network can be Paused

The core concept of cryptocurrencies is to be decentralized without central authority or control.

In the case of IOTA, it appears there is some degree of centralization, albeit it may be a good thing in this regard.

By shutting down the Coordinator node – which will be removed altogether in a future updated – potential damage to the network has been prevented.

The initial statement mentions how the IOTA Foundation is working with law enforcement.

Apparently, there was a coordinated attack involving stolen funds.

It is believed $1.6 million in MIOTA may have been stolen, albeit that figure has yet to be confirmed.

Some evidence hints at high several high-value accounts are affected, which may be caused by an exploit in the Trinity desktop wallet.

It is evident that the pausing of the network may be the best course of action in such a scenario.

It is far from ideal, and will undoubtedly continue to spark many debates all over the world. 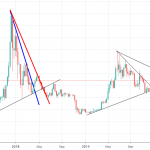 This One Headline Just Made Crypto Investors Astronomically Bullish on BTC

Coronavirus Symptoms: How To Avoid Getting It, What To Do If Infected

HTF Inside Green Bars Are Bullish