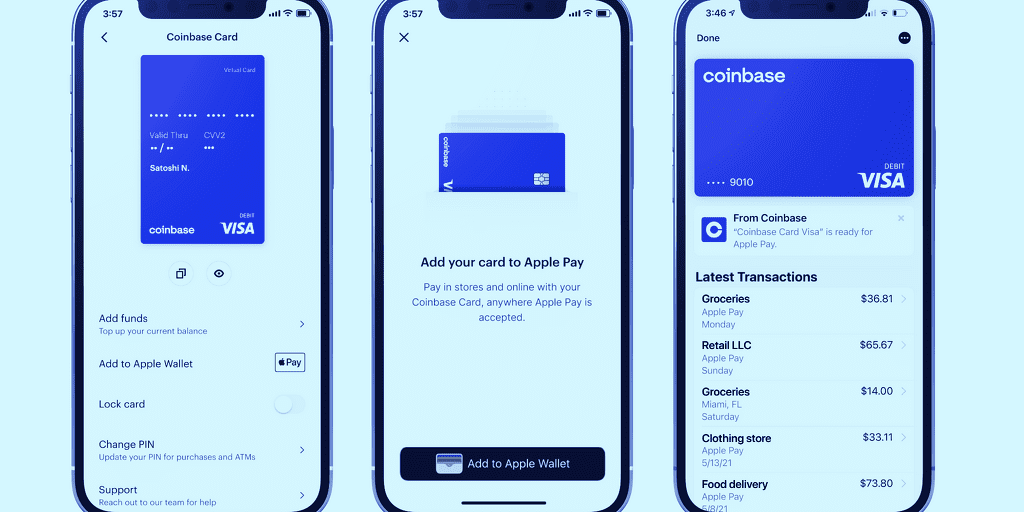 Coinbase announced on Tuesday that users of its debit card offering—known as Coinbase Card—can now pay with their mobile phones using Apple Pay. The news marks a new level of integration between two major U.S. brands, and reflects crypto’s ongoing push into the mainstream of retail commerce.

Coinbase Card lets users draw on their balances of Bitcoin and other cryptocurrencies to make purchases in stores or to draw cash from ATM machines. While the product has been available in the U.K. and Europe since last year, U.S. customers remain on a waitlist—though the company said in a blog post it will invite “select customers off the waitlist” starting this week.

Coinbase adds that those approved for the debit card can begin using it immediately via Apple Pay even if they are waiting for the physical card to arrive. The company also announced U.S. customers can also use Google Pay, which has been available to debit card users in the U.K and Europe since last year.

Coinbase Card is intriguing in that, in some cases, it is among the first to offer an economic benefit that can outweigh the fees that go with using a crypto debit card.

For U.S. users, that benefit comes in the form of earning rewards in the form of 1% back in Bitcoin for every purchase or 4% back in Stellar Lumens. These rewards can offset the 2.75% fee that Coinbase charges for every crypto debit card transaction.

While that fee means consumers will still lose money on Bitcoin transactions, there is an important exception: Any transaction they make using the USDC stablecoin doesn’t come with a fee. The upshot is that Coinbase customers who make purchases in USDC earn 1% back in Bitcoin—a benefit comparable to many credit card rewards in the U.S.

More broadly, the combination of those rewards and the ease-of-use of Apple Pay could result in an uptick of Bitcoin-based payments in the U.S.

The rewards benefit is only available to Coinbase customers in the U.S., however, meaning crypto debit card transactions remain an iffy value proposition for those in Europe and the U.K. Some customers, however, may find that the novelty of shopping at stores with Bitcoin, Ethereum or other cryptocurrencies outweighs the drawbacks of the fees.

Coinbase, which relies on the widely-used Visa network to process debit payments, is one of numerous companies offering crypto debit cards. Others include Gemini and BitPay, both of which have announced Apple Pay integrations of their own. But Coinbase’s large customer base along with the rewards offering could help expand beyond what is currently a very niche offering.