What is Perpetual Contract?
Perpetual contract is a derivative product that is settled in digital tokens such as Bitcoins (BTC). Traders enter either into a long (profit from upward trend) or short (profit from downward trend) position. Available leverage ranges from 1–100x.

Huo Xuewen, Director of the financial regulator in Beijing, China said the Chinese government would not issue cryptocurrency exchange licenses in China. China remains stringent on its cryptocurrency policy and decisions making.

Bitmain to cancel its IPO listing in the U.S. while being under investigation by the U.S. Department of Justice for its recent deals involving BitClub an infamous Ponzi scheme network.

Leading cryptocurrencies followed through with the rise of BTC. BSV, BCH, DASH, ZEC and ETC with upcoming halving are performing relatively well.

Bitcoin has rose from 8100 to 8500 and it has broke the major trendline from the October 26. Bitcoin may continue to rise and test the 8700 resistance. There is signs of overbought, a correction may occur when the price touches the key resistance mark.

(The above is an opinion, not financial advice) 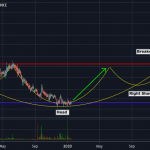 3 Use Cases Could Send Bitcoin (BTC) To $1 Trillion