Bitcoin is yet to reach its yearly bottom, at least according to a recent Twitter poll. Despite surging with 80% since the March 13th low of $3,700, the majority still anticipate new price declines in BTC’s future.

Pessimism Across The Community

March 2020 has been quite volatile for Bitcoin and the whole cryptocurrency market. The primary digital asset had a monthly high of $9,200 before the coronavirus effect took its toll on all markets. In just a week, BTC plunged to $3,700 on various exchanges but managed to recover since then and is now trading at $6,600.

Although the current level seems substantially higher, a recent poll reveals that the community is still skeptical regarding Bitcoin’s upcoming price developments.

The Bitcoin bottom is:

Interestingly, the last time the largest cryptocurrency found itself below $3k was in August 2017 – before the parabolic price increase.

The COVID-19 outbreak brought severe times of uncertainty, panic, and doubts, which ultimately led to massive sell-offs in all financial markets. As world leaders and health organizations are, unfortunately, nowhere near to contain and stop the virus, more sales are to be expected, as the people need cash in these tough moments.

With this in mind, it’s plausible that investors will continue selling their BTC holdings, which could drop the price even further.

The popular Fear and Greed Index, used to measure and aggregate various types of data to establish the current sentiment in the market, confirms the dominant pessimistic feelings. It provides results from 0 (extreme fear) to 100 (extreme greed). Today, and in the last several weeks, it has been buried deep in the “extreme fear” section. 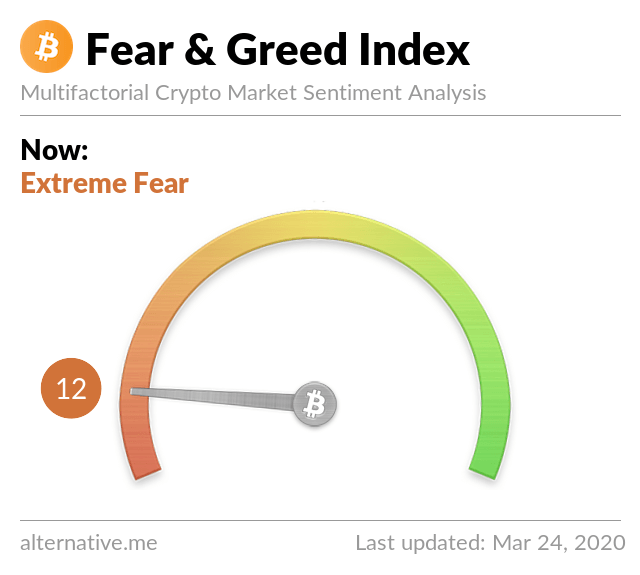 It’s also worth noting that the general sentiment in the community changes as quickly as the price of Bitcoin moves. Most people follow the trend, but it doesn’t mean that they are necessarily correct – just the opposite.

Consequently, following that bullish move, another poll at that time indicated that most people foresaw a new all-time high in Bitcoin’s future.