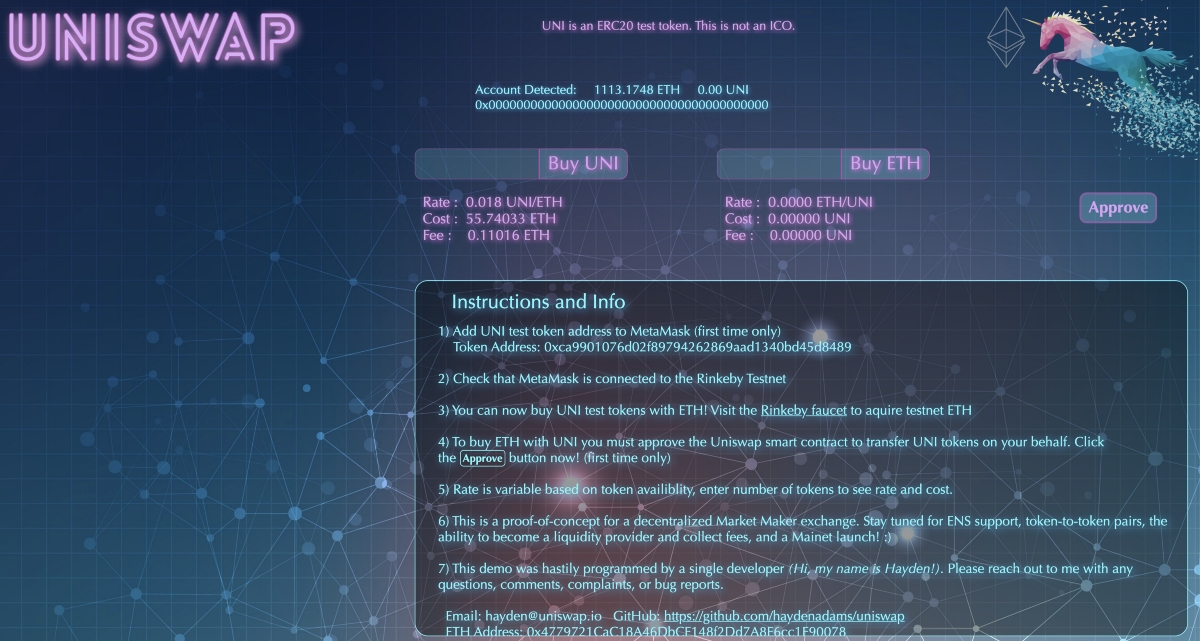 On July 6th, 2017 I was laid off from my first job out of college, working as a Mechanical Engineer at Siemens. Feeling down and directionless I informed my friend Karl Floersch, who at the time was working on Casper FFG at the Ethereum Foundation. The conversation went something like this:

Hayden: I just got laid off 🙁

Karl: Congratulations, this is the best thing that could have happened to you!!! Mechanical Engineering is a dying field. Ethereum is the future and you’re still early. Your new destiny is to write smart contracts!

Hayden: Don’t I need to like know how to code?

Karl: Not really, coding is easy. Nobody understands how to write smart contracts yet anyway. Ethereum, proof-of-stake, trustless computation, etc.

Catching me at a low point, Karl convinced me to accept Ethereum into my life. I was determined to give it a shot, and spent the next two months learning the basics of Ethereum, Solidity, and Javascript.

In order to expand my skillset, I decided it was time to work on a “real” project. At Karl’s suggestion I decided to implement an automated market maker, as described by Vitalik in this reddit post and this blogpost.

From October to November I built a proof-of-concept, including a smart contract and my very first website. The contract had a single liquidity provider and allowed simple swaps. Here it is in all its glory:

Disclosure — I added one line of code window.ethereum.enable() to make it work with 2019 MetaMask.

Building the POC was my first step down the rabbit-hole of programmable money. It was the most intriguing thing I had worked on in my life. It didn’t even feel like work.

I also began to see the UX implications of automated market makers. At the time, EtherDelta was the only decentralized exchange with traction, but the UX felt messy and unintuitive. Using my demo somehow felt better.

In a talk at Devcon 3, Karl used my Uniswap demo as an example of the power of crypto-economics and open-source financial applications on Ethereum.

I had been unemployed for five months, living off cryptocurrency I was fortunate enough to have bought earlier in the year. Uniswap was a success by my only metric at the time — I knew how to write smart contracts. Maybe it was time to move on and get a job (if there were any jobs for Solidity-native developers).

However an attendee of Karl’s Devcon talk — Pascal Van Hecke — reached out to me. He had been closely following the progress of automated market makers on Ethereum and expressed interest in supporting my efforts. He even gave a grant to fund my next month of research. We began weekly calls to discuss progress.

Pascal brought new ideas to the table. More importantly, however, our calls brought a sense of structure and accountability to my work. Uniswap had two major unsolved problems which I set out to tackle with an engineering mindset:

By this point I was fully captivated by Ethereum’s unbounded potential. These were the properties I cared about:

It was censorship resistant. No one could stop it.

It was decentralized. No on controlled it.

It was permissionless. Anyone could use it.

It was secure. Anyone could verify execution.

Yet something felt off in the ether. The major projects on Ethereum embodied some of its properties, but few embraced them fully. Central points of failure, censorable applications, and overly complex architecture. DAPPs were designed entirely around the idea of having a token for use cases that clearly did not need one.

I began thinking about Uniswap not just as a learning tool for myself — but one for others. I could not imagine a world where it competed with “real” projects. You know — the ones that raised between $20,000,000 and $150,000,000 in Summer 2017. But maybe it could serve as an example of an application that truly embodied Ethereum.

In December, I had attended an NYC Mesh meetup with Karl, following an anti-crypto article from its founder. Now Ethereum famous — Karl was recognized by a Coindesk reporter who asked him about the intersection between meshnets and crypto. Karl did not want to give an interview so he directed the reporter to me. I blathered on about Layer 2 solutions I barely understood, and was quoted in an article.

Callil Capuozzo, a friend from from elementary school through high school who I had not seen in ~6 years, saw the article and reached out. Since then he had worked as a designer at Microsoft, Google, and more recently had delved into Ethereum while working on a website for FOAM.

By late January 2018, all major smart contract issues had been solved. Exchange contracts could support multiple liquidity providers by using an internal liquidity token to track each LP’s share of generated fees and the underlying collateral. A factory contract allowed anyone to add support for a token. All tokens were paired with ETH allowing it to be used as an intermediary for anything-to-anything swaps in a single transaction.

I reconnected with Callil just after finishing the updated Uniswap smart contracts, and we discussed the project at length. He offered to help out with the frontend — which was now lagging behind the contracts. Working around his other projects, Callil designed and built a sleek new interface for Uniswap on top of my incredibly shitty React codebase.

Several weeks in it was pretty clear my react code was untenably bad. Fortunately, I had recently reconnected with a friend from college, Uciel Vilchis. Uciel was just coming out of a coding bootcamp (that he entered on the advice of our mutual Karl Floersch).

You should learn to code — Karl Floersch

Looking to build up his resume and experience, Uciel agreed to refactor the Uniswap frontend codebase.

By March, 2018, the three of us had built a fully featured demo of Uniswap. Yes, of course I dug it up and hosted it. Here it is:

Disclosure — I added one line of code window.ethereum.enable() to make it work with 2019 MetaMask.

By April 2018 I had been unemployed for 10 months. The crypto I was living off of was down over 75%, dramatically decreasing my personal runway. Despite this, I yolo-bought a last minute flight to Seoul, South Korea. This was the first time I left North America in my 24 years of life. Partially a personal trip, it was timed to coincide with Deconomy 2018.

I attempted to enter the conference without a ticket, but was firmly rejected. However, Karl was just arriving along with other members of the Ethereum foundation. Karl pulled me to the side, and introduced me to Vitalik, who he had already discussed Uniswap with in the past. Our conversation went something like this:

Karl: This is my friend Hayden, he made Uniswap!

Vitalik: Hi nice to meet you! Is it open source?

Vitalik: *reads my entire smart contract on his phone*

Vitalik: Have you considered writing it in Vyper? Also, you should apply for an Ethereum foundation grant.

Vitalik’s ideas had yet to fail me. Immediately after returning from Seoul, I spent two weeks re-writing the contracts in Vyper. There were no guides or developer tools like Solidity had, but I was able to use the original Casper FFG contract as a reference. At the time, this was the only Vyper contract I could find outside of simple examples in the core Vyper repo.

Up to this point Karl was my only close friend in the crypto world, but that was soon going to change. Just before leaving Karl invited me to a small social gathering. There I met and became friends with Philip Daian, Dan Robinson, and Andy Milenius. In addition to being wonderful people, all would become crucial to the success of Uniswap and influence its future direction.

Two weeks later, in May, I flew to Toronto for Edcon 2018. This was the first Ethereum conference where I made it past security. I spent 3 days attending talks, meeting people, and demoing Uniswap. My four friends in crypto were all there and introduced me to a ton of other people. My crypto social-network was expanding.

Among the friends I made at Edcon, Jinglan Wang deserves a shoutout as she has been a fantastic advisor ever since.

I met David Knott, a former Vyper dev, in person for the first time. I told him that I had re-written Uniswap in Vyper. The next morning at 8am I woke up to a phone call from him. He told me he was scheduled to give a talk on Vyper including a live demo in two hours. Uniswap was the only DAPP being written in Vyper, and he asked if I was interested in giving the talk instead.

I explained that I had only just learned Vyper two weeks prior, I had never spoken in public, and that I generally had no idea what I was doing. David assured me it was fine — two weeks building on Vyper was more than enough to speak publicly and authoritatively on it. So I gave my first talk:

I took the same flight back to NY as Dan. We spent the entire time gas-optimizing Uniswap. By the time the plane landed, Uniswap was 30% more efficient. It was now the most gas efficient exchange on Ethereum by a significant margin.

Edcon 2018 was extremely encouraging. The reactions to my Uniswap demo were more than just mild interest. People were legitimately excited by it. They seemed to understand and share the values I intended for it to be an example of. I realized Ethereum’s community went far beyond ICOs. There were people who truly cared about its vision of a permissionless, decentralized financial system.

My plane home from Edcon landed me directly in NYC Blockchain Week. I spent the next week attending an endless spew of events and parties. A tweet made its way onto my feed.